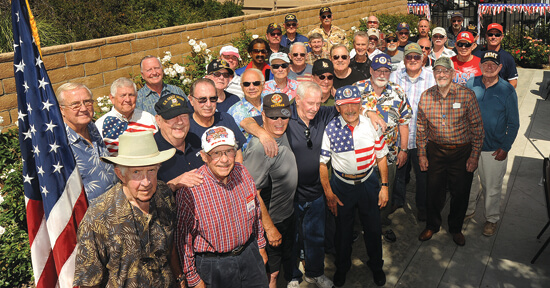 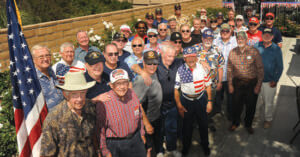 On a beautiful, sunny Memorial Day afternoon, the members of the Mission Viejo Elks Lodge united to commemorate our fallen United States servicemen and servicewomen. Lodge Exalted Ruler Mike Klinger welcomed more than 200 members, Veterans and other guests as they enjoyed Elks fellowship and dined on delicious barbecued hamburgers, hot dogs and corn on the cob.

Exalted Ruler Klinger stepped to the podium and spoke of the true meaning of Memorial Day, stating, “Today, Americans across this nation and citizens located around the world will pause throughout the day to observe Memorial Day. Since its first official observation on May 5, 1868, when it was called Declaration Day, it has been a day of remembrance for those who sacrificed and died in our nation’s service. And while it was originally dedicated to honor Civil War soldiers, we know it today as a celebration in memory of all who have fought for and defended our right to freedom.”

27 year Elks member, Richard Holmes shows off this 63 year old jacket he wore aboard the submarine Greenfish at Pearl Harbor.

Next, Lodge Veterans Services Chairman Jerrie Muir took the microphone and lead the gathering to recite the Pledge of Allegiance and sing “God Bless America”. Afterwards he requested a moment of silence from those assembled to show support of our First Responders and the men and women of our Armed Forces. Vets Chairman Muir then called for all Veterans in attendance to come forward to be recognized and participate in a group photo. At least 45 Veterans stepped forward to assemble for the photo and they received sustained applause from the appreciative and patriotic crowd.