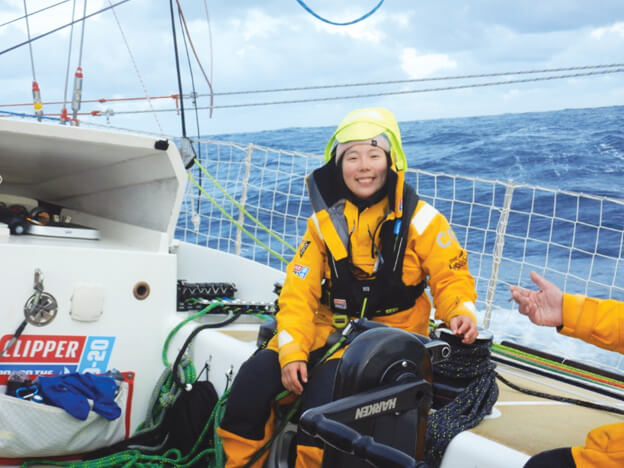 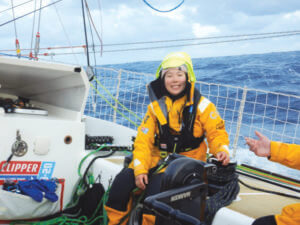 Candela Guo on board the GoToBermuda team yacht.

“It is like nothing I’ve experienced in my life – you really feel the power of mother nature. I know it sounds cliché but it’s very difficult to explain what it’s like until you’ve been through it.” says Candela, a 24-year-old student from Irvine.
Candela Guo is spending eleven months racing around the planet in the Clipper Round the World Yacht Race, the toughest endurance challenge on the planet and the only event of its type that allows anyone to race the world’s oceans, regardless of any previous sailing experience.
Setting off from London, UK, on 1 September 2019, Candela has raced some 20,000 of the 40,000-mile-long route and has so far called into Portugal; Punta del Este, Uruguay; Cape Town, South Africa; Fremantle and Whitsundays, Australia. During this time, she has been racing 24 hours a day, for up to four weeks at a time, and faced freezing cold temperatures, waves taller than buildings and wind speeds of over 110km/h.
“To be honest, I still can’t believe I have made it this far!” says Candela on reaching the latest stop in Airlie Beach, Whitsundays, Australia after spending Christmas and New Year at sea. Ir
She adds: “Getting this far, I am even more serious about the race and I have even more determination to complete it now I’ve started. I have learnt that I am more capable than I thought I was.”
Candela is one of 700 everyday people, from 42 different countries, that has signed up to take part in the Clipper 2019-20 Race. Some 40 percent have never sailed before they embark on their Clipper Race training – four intensive levels which must be passed before starting the race.
Successful crew are split into eleven equally matched teams and are led by a professional skipper and first mate. Each team races identical purpose-built 70ft ocean racing yachts which are sponsored by destinations or global brands. Candela is racing on board the team yacht called “GoToBermuda” – the Bermuda Tourism Authority sponsored entry. 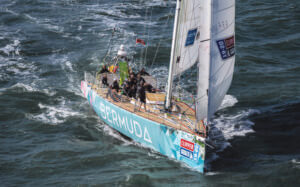 Clipper Round the World Yacht Race.

Speaking about the destination, Candela said: “I’ve been to Bermuda and I am so looking forward to going again when we race there later this year. I honestly think it’s one of the best tourist destinations I’ve ever been to and I am so excited to go back – I hope we do well on that leg in particular!”
Split into eight stages, crew can choose to race around the world or take part in one of more of the individual stages with the global route. This is no cruise; the yachts are stripped back and luxuries are sparse on board.
Speaking about her friends and family at home, in China and the USA, Candela adds: “When I told my family what I was doing, they thought I was a bit crazy! But they have been very supportive, and I look forward to seeing them when the race reaches China and the USA. Most of my friends haven’t been able to see the boat yet but I look forward to showing them around when we get to China and the USA – I think they will suddenly realize how difficult it can be! They have all sent lots of lovely messages and are really supportive.”
The Clipper Race fleet has just departed Airlie Beach in The Whitsundays and is heading for Sanya, China, the next port of call. From there, the teams will race to Subic Bay, Philippines; Zhuhai, China; Seattle and New York, USA, via the Panama Canal; Hamilton, Bermuda; Derry-Londonderry, Northern Ireland, before returning to London, UK, in August.